The following production system and service will be unavailable during scheduled system maintenance and improvement.

Figure 1: Iterative refinement of DLBCL-NOS and the lymphoma microenvironment by cytogenetic and molecular studies. Figure created with BioRender.com (under a full license) 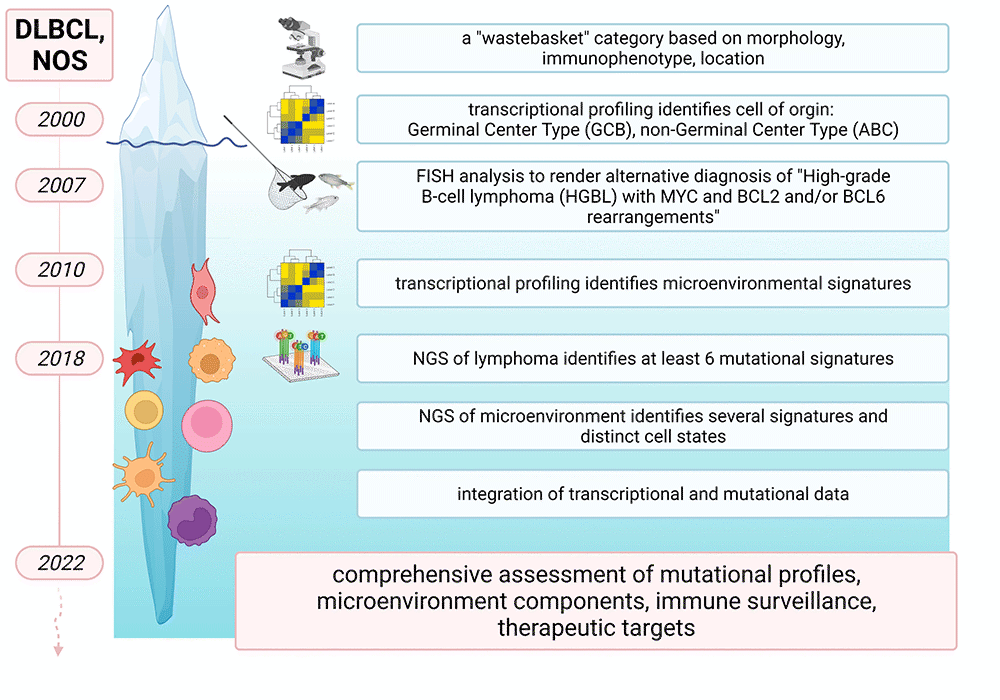 Large B-cell lymphomas are a heterogeneous group of aggressive non-Hodgkin lymphomas (NHL). Treatment responses and patient outcomes vary greatly between subtypes and depend on whether lymphomas occur de novo or as transformation of a preexisting low-grade lymphoma, on anatomic location, or on morphologic variant.1 Most cases (up to 35% of NHL in Western countries) are classified as diffuse large B-cell lymphoma, not otherwise specified (DLBCL-NOS), as they do not fulfill morphologic, immunophenotypic or cytogenetic criteria for one of the specific subtypes or distinct entities according to the 2016 revision of the World Health Organization classification.2 Over the course of time, this "waste basket" category has undergone iterative prognostically relevant refinements, and it is now recognized that DLBCL-NOS exhibits structural rearrangements, complex copy number changes and somatic mutations that occur within intricate interactions with the non-malignant tumor microenvironment (TME).3,4 Herein we provide a high-level overview of how molecular studies have deconstructed DLBCL-NOS and its TME (Figure 1), and how these findings can improve diagnostic/ prognostic accuracy and identify treatment options (Figure 2).

Figure 2: Somatic mutational and microenvironmental mutational signatures of DLBCL-NOS with biological and prognostic significance. Figure created with BioRender.com (under a full license) 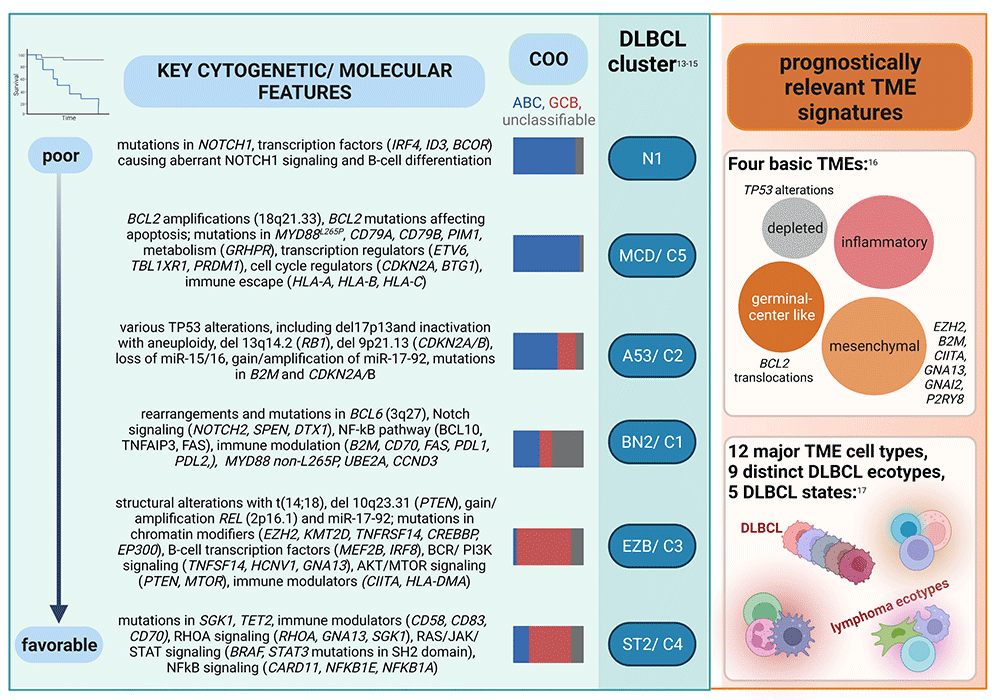 Early microarray-based studies identified three prognostically relevant subtypes of DLBCL with gene expression patterns indicative of different stages of B-cell differentiation, also known as cell of origin (COO)5,6: a germinal center B-cell-like subtype (GCB-like), an activated B-cell-like (ABC-like) subtype, and a “type 3” category that did not cluster with either the GCB-like or ABC-like groups. As patients with GCB-like DLBCL have generally better overall survival than those with ABC-like DLBCL, both with and without rituximab-containing regimens, and better response to novel treatment approaches such as the Bruton's tyrosine kinase (BTK) inhibitor ibrutinib7, the 2016 WHO classification requires the identification of ABC-like versus GCB-like DLBCL.2 Additional gene-expression profiling (GEP) studies using a variety of methods, including GEP based on quantitation of RNA transcripts from formalin-fixed, paraffin-embedded tissue, further refined COO categories and provided additional insight into DLBCL pathogenesis, genomic composition and clinical behavior.4,8 To facilitate the assessment of COO in daily clinical practice, immunohistochemistry (IHC)-based surrogates have been developed. While not correlating perfectly with GEP, the Hans method using CD10, BCL6, and MUM1 protein expression is the most widely accepted classifier for GCB-like versus non-GCB-like determination.9 Compared to other methods such as the Choi (based on GCET1, CD10, BCL6, MUM1, and FOXP1 IHC)10, Visco (CD10, FOXP1, BCL611, or Tally algorithm (pairwise comparison of GCB [GCET1 and CD10] and ABC [FOXP1 and MUM1] immunophenotypes)12, Hans is considered the most “user-friendly” and most replicable, as it is based on only three commercially available antibodies that are commonly performed in most laboratories, yielding staining results that are relatively easy to interpret.

Subsequent to the COO categories, the prognostic significance of the combination of known recurrent structural rearrangements was illuminated. Currently, DLBCL-NOS must be distinguished from high-grade B-cell lymphomas, NOS, and from high-grade B-cell lymphomas with MYC and BCL2 and/ or BCL6 rearrangements ("double-hit" and/or "triple-hit" lymphomas). The later are associated with dismal outcome and poor response to immunochemotherapy and transplantation.2 As MYC, BCL2 and BCL6 rearrangements not meeting “double-hit"/ "triple-hit" diagnostic criteria are also present in 5%-15%, 20%-30% and 25%-45% of DLBCL, respectively, consensus guidelines recommend cytogenetic assessment (commonly performed as FISH studies using break-apart probes) for initial diagnostic workup.8 Of note, a subset of DLBCL-NOS referred to as “double-expressor” lymphomas exhibit MYC protein overexpression in the absence of cytogenetic evidence of MYC gene rearrangement, in association with BCL2 overexpression. Double-expressor DLBCL-NOS have inferior outcome compared to those lacking MYC/BCL2 overexpression, but are prognostically more favorable than bona fide "double-hit"/"triple-hit" lymphomas.8

Within the ABC-like subtype based upon COO, the worst prognosis is associated with the NIH N1 category (characterized by NOTCH1, ID3 and BCOR mutations). An unfavorable prognosis is also seen for the NIH MCD, which is highly concordant with DFCI Cluster C5. These DLBCLs are often associated with extranodal involvement and are enriched for concurrent MYD88 p.L265P and CD79B mutations, together with other mutations causing activated NF-kB signaling, increased proliferation, impaired apoptosis, and immune escape. An intermediate or more favorable prognosis is seen for BN2/Cluster 1 which shows a marginal zone-like mutation patterns characterized by BCL6 translocations, NOTCH2 mutations, and mutations in the B-cell receptor (BCR) and NF-κB signaling pathway. While the ABC-like subtype is still enriched in this category, there is a remarkable proportion of unclassifiable DLBCL. In contrast, EZB and Cluster 3 are almost exclusively composed of GCB-like DLBCL and are characterized by epigenetic and PI3K signaling pathway mutations and BCL2 translocations, as well as a variety of other genes involved in germinal center biology. ST2/Cluster 4, also predominantly composed of GCB-like DLBCL, is enriched for mutations affecting epigenetic regulation and PI3K and JAK/STAT signaling (nodular lymphocyte-predominant Hodgkin lymphoma [NLPHL]- and T cell histiocyte-rich large B cell lymphoma [THRLBCL]-like). Among the GCB-like subtype, ST2/Cluster 4 conveys a more favorable prognosis than EZB/Cluster 3. Finally, a separate category which overlaps both the ABC-like and GCB-like COO subtypes - A53/Cluster 2 - is characterized by various TP53 alterations, including inactivation with aneuploidy, and B2M and CDKN2A/B mutations. Together, these findings emphasized the genetic and prognostic diversity within GCB-like and ABC-like subgroups, and that constellations of mutations, structural rearrangements, and copy number alterations need to be considered.

Accumulating evidence from clinical trials suggests that the adverse effects of certain genetic subtypes can be overcome by specific targeted treatment approaches. Wilson and colleagues demonstrated that adding ibrutinib to the standard rituximab plus cyclophosphamide, doxorubicin, vincristine, and prednisone (R-CHOP) resulted in a 3-year 100% event-free survival in patients <60 years with MCD and N1 subtypes.18 Similarly, patients with unfavorable PIM1, SPEN or MYD88 mutations (associated with the BN2/Cluster 1 or MCD/Cluster 5 groups) or signatures including NF-κB, IRF4 and JAK-STAT (multiple subtypes including BN2/Cluster 1 and ST2/Cluster 4) benefited from the addition of the immunomodulatory drug lenalidomide to R-CHOP19, while patients with DLBCL with a distinct CD8 T-cell signature benefited from treatment with the proteasome inhibitor bortezomib and R-CHOP17. In contrast, the addition of venetoclax, a Bcl-2 inhibitor, to R-CHOP did not improve outcome of DLBCL patients with overexpression of BCL2 (EZB/Cluster 1 or MCD/Cluster 5), highlighting the complexity of DLBCL pathogenesis.20

Together, molecular studies have allowed a better understanding of the clinical heterogeneity and differences in responses to therapy in DLBCL-NOS. Future studies are needed to understand what DLBCL characteristics drive different TME compositions (and vice versa), to integrate molecular findings into established clinical prognostic and diagnostic algorithms, to develop clinically applicable surrogate markers, and to identify novel targeted treatment approaches. As we look to the future, a targeted knowledge-based biology-driven approach may point to more effective new treatment strategies, such as BLYM-777, a study designed to prospectively and comprehensively assess mutational profiles, TME components, immune surveillance and response to therapy.4

Annette S. Kim, MD, PhD, FCAP, is an Associate Professor of Pathology at Harvard Medical School and practices at the Brigham and Women's Hospital as a hematopathologist and as the Associate Director of the Center for Advanced Molecular Diagnostics. She is also the Co-Director of the Interpretive Genomics Program and the Medical Director of the BH3 Profiling Flow Cytometry Core, both at Dana Farber Cancer Institute. She has served as a member of Molecular Oncology Committee and is current a member of the Personized Healthcare Committee for College of American Pathologists. In addition, Dr. Kim conducts an independent research program on the study of small non-coding RNAs in myelodysplastic syndromes via next generation sequencing and single cell phenotyping by mass cytometry.

Fabienne Lucas, MD, PhD, is a Fellow in Hematopathology at Brigham and Women's Hospital.