Read the cases in order starting with Part 1. The case includes questions to support your learning as you progress through each part. In addition, the case includes a summary, key points, multiple-choice questions with answers, and a list of references. After completing at least one case (hopefully you will complete all three), please provide your feedback via a short survey.

Dr. Feingold, the head of the infection control committee in charge of harmonizing practices at three of the local hospitals in your health care system tells you, the new medical director responsible for laboratory harmonization, that he would like to set up a standardized protocol for reflexively evaluating high risk urinalysis samples by urine culture because urine cultures were being over-utilized and misutilized. In fact, a recent survey of nursing staff and resident physicians in the emergency departments and intensive care units at each of the sites showed that urine cultures were sometimes being ordered for inappropriate and non-evidence-based reasons such as “urine having a strong smell” or urine in a Foley “looking like it’s infected.”

He asks if you can help the team to create a single reflex order in the laboratory information system (LIS) so that urinalysis specimens will be treated uniformly across all sites. If the macroscopic and microscopic results of the urinalysis meet predefined diagnostic criteria, then those specimens will automatically be reflexed to urine culture. You agree that individual orders for urine culture or urinalysis will still be available for specialized services, so that clinicians who require those specific tests results will still be able to order the tests individually.

You tell Dr. Feingold that the department of laboratory medicine will be happy to help set up the reflex testing since it will improve patient care and test utilization by reducing the number of cultures which are currently being performed for inappropriate reasons. You agree to set up a urinalysis with reflex to urine culture testing order for deployment across all three hospital laboratories. After meeting with the supervisors of the microbiology and chemistry laboratories at the three sites, you learn that the same urinalysis instruments are being used in all three laboratories. You request the standard operating procedures (SOPs) for urinalysis from all three sites and a sample of how the results appear when they are reported in the electronic health record (EHR).

SOP and Sample of EHR Results

Questions to Think About

1. What role does reflex testing play in the laboratory?

Reflex testing is an important tool for directing additional testing without the intervention of the ordering physician. Reflex testing occurs based on a predefined set of rules, such as when an initial test result meets specified criteria (e.g., positive or outside reference parameters). The purpose of reflex testing is to provide timely, cost-effective follow-up testing to guide care which cannot be determined solely by the results of the primary test.

2. Why would it be important to have the director and laboratory staff review the SOPs of all sites involved in harmonization?

Harmonizing laboratory practices across sites requires a review of each laboratory's current practices and a discussion about appropriate or relevant differences (such as different patient populations served). The laboratory director and managers need to have a high level view of the differences and similarities of individual laboratory practices with an aim to optimize the performance of testing, align laboratory practices when possible, and ensure that everyone is cognizant of the variations in practice, especially when considering the implementation of reflex testing with uniform rules across multiple sites.

You notice a number of discrepancies between the SOPs of the three laboratories, potential errors in the SOPs themselves, and problems with how the results are being reported in the LIS and EHR, some of which are a consequence of the middleware rules set up by each laboratory, for example:

For Site #1, the SOP stated that white blood cells (WBC) were enumerated as WBCs per high power field (HPF); however, you noticed that a WBC within the reference range (0-5 /HPF) was being hidden from reporting and did not appear in the EHR results.

For Site #2, the SOP stated that bacteria were reported as “None” if they were not present; however, you found that a negative urine bacteria was being hidden from reporting and did not appear in the EHR results.

You ask the laboratory supervisors if their sites used middleware to connect the analyzers with the laboratory information system (LIS) and if they had rules setup for tests such as automated reflex testing and autoverification. They confirmed that each of the three laboratories were using reflex rules housed within each laboratory’s installation of the same middleware software purchased directly from the vendor.

You also confirm with the vendor that the raw data (original values on the analyzer), such as bacteria count in number/µL, were not being transmitted to the LIS. Therefore, the only result contained in the LIS (and by extension, the EHR) was the interpretation of the result by the middleware rules.

On a more thorough examination, you find that the middleware rules are not subjected to document control or review as part of the laboratories’ annual SOP review process and that the laboratories did not have a defined process for evaluating whether the results appeared in the EHR as expected. You ask the laboratory supervisors at each of the sites to provide you with the middleware rules. The pathology resident on service is surprised to learn that the three laboratories are all using the same analyzer and middleware and volunteers to make a table summarizing how each site is interpreting and reporting urinalysis results.

Questions to Think About - Part A

Middleware is software that serves as an automation tool that connects different applications/hardware devices that need to interact with each other, such as connecting an analyzer with the laboratory information system.

2. What is the function of rules?

Rules are a defined, standard mechanism used to trigger a set of actions based on simple or complex formulas. Rules typically use one of the following syntax:

3. Why might it be valuable to include the middleware rules in the SOP?

Including the rules in the SOP makes the rules visible to everyone in the laboratory and helps to ensure that the values and interpretations in the SOP correspond with the rules being used to result patient samples.

4. Why would it be important to ensure that the middleware rules are reviewed as part of the annual SOP review process?

6. According to the CAP, is the laboratory responsible for ensuring that the results appear in the EHR as expected? Which CAP checklist item mentions this responsibility?

Questions to Think About - Part B

Review the middleware rules below for the 3 sites and then answer the questions provided for each site. 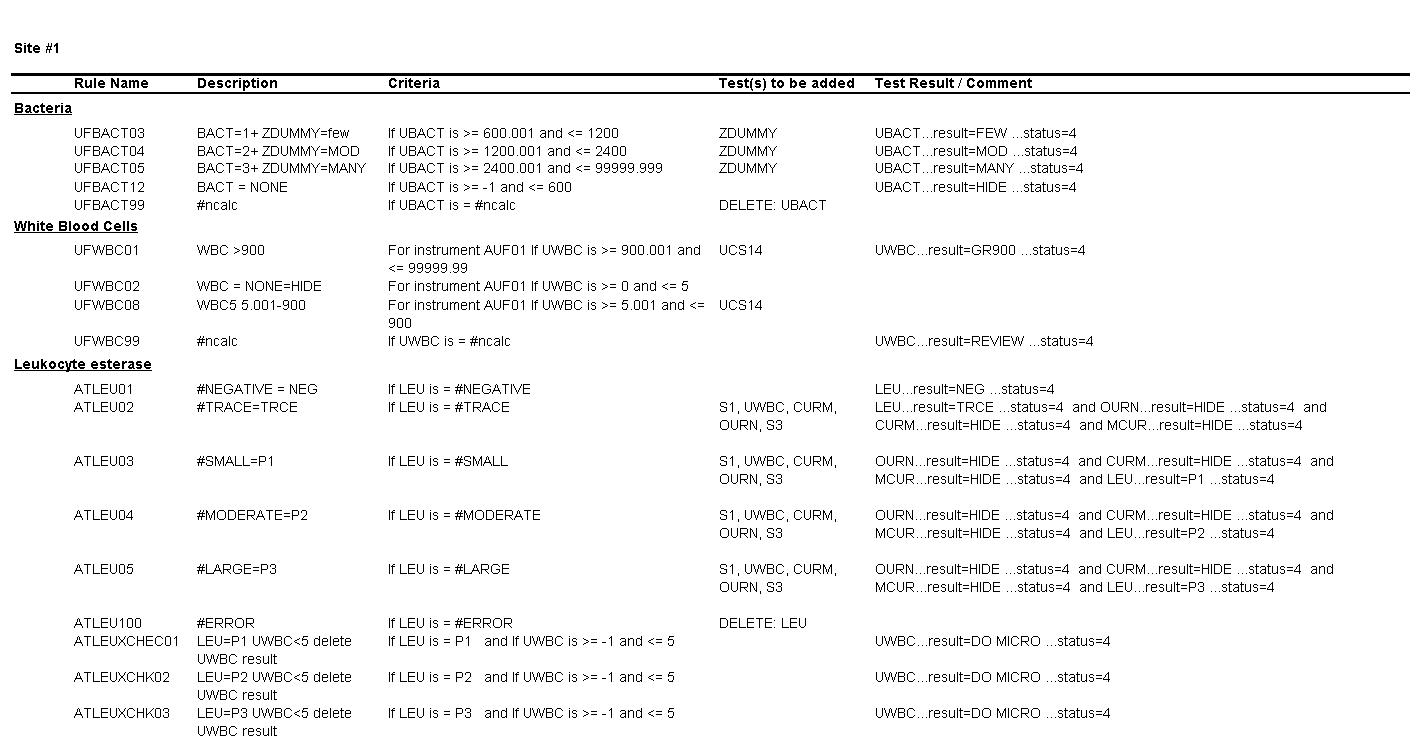 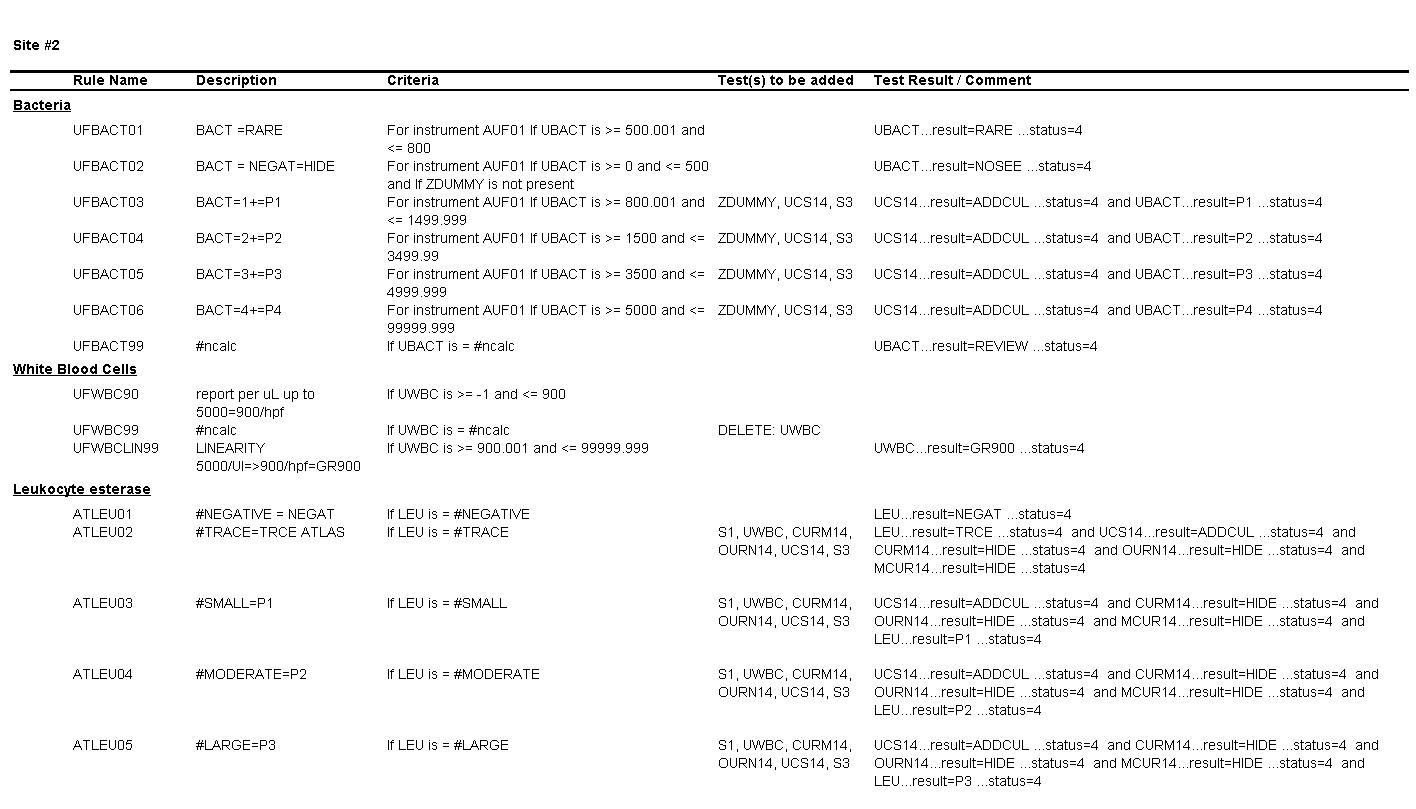 1. What result would you expect to see in the EHR for a WBC count of 1 to 5 per HPF?

The result for WBCs will be hidden and will not appear in the EHR.

2. What is the upper threshold for calling bacteria negative?

Bacteria less than or equal to 600 bacteria per µL.

3. What result would you expect to see in the EHR for a value of 3000 bacteria per µL?

The result for bacteria would be “Many.”

4. What result would you expect to see in the EHR for a WBC count of 900 per HPF?

The result for WBCs will be reported as “Greater than 900.

5. What result would you expect to see in the EHR for a value of 500 bacteria per µL?

The result for bacteria will be hidden and will not appear in the EHR.

6. What result would you expect to see in the EHR for a value of 3000 bacteria per µL?

7. What result would you expect for a value of 5 white cells per HPF?

The result for WBCs would be 5 /HPF.

8. What result would you expect to see in the EHR for a value of 3000 bacteria per µL?

The result for bacteria would be “Few.”

9. Based on the copy of the rules the supervisor provided you, can you tell how a bacteria count of 500, 3500, and 5000 /µL would be categorized/reported? 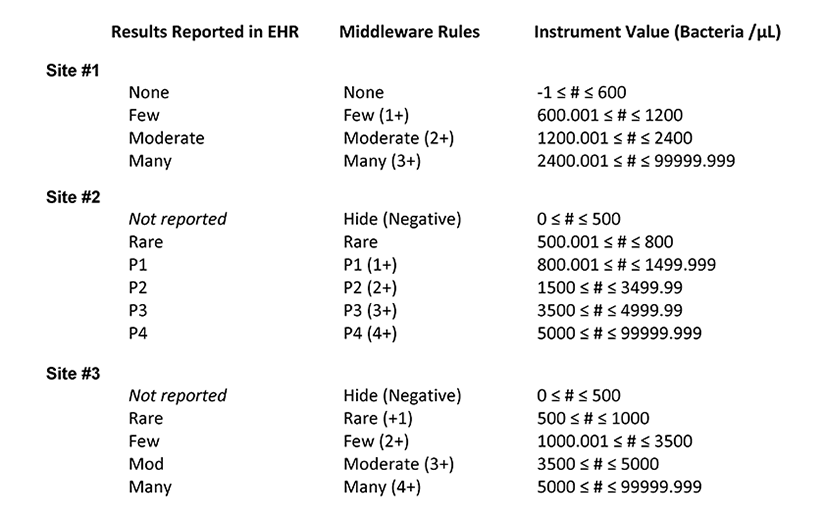 Table 1. Summary of the middleware interpretation of the instrument values for number of bacteria per µL and the corresponding results reported in the electronic health record (EHR) for each site 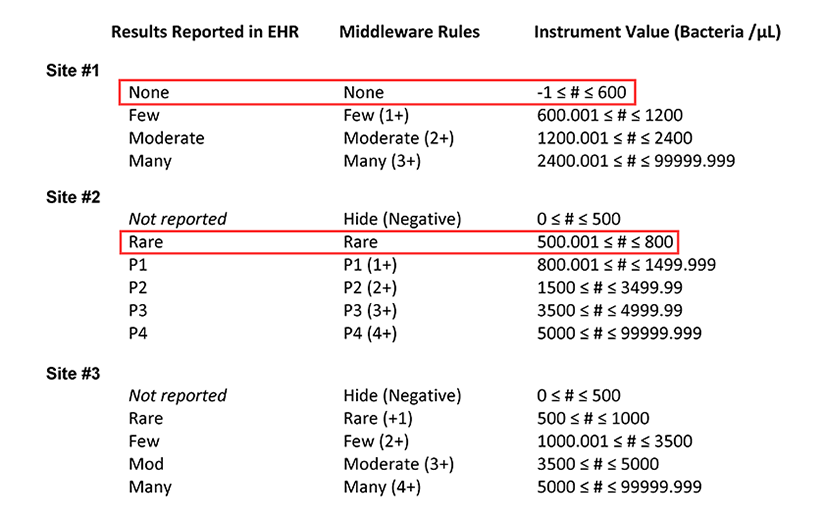 Table 1a. Summary of the middleware interpretation of the instrument values for number of bacteria per µL and the corresponding results reported in the electronic health record (EHR) for each site. This table highlights how a bacteria count of 600 /µL is reported at sites #1 and #2. 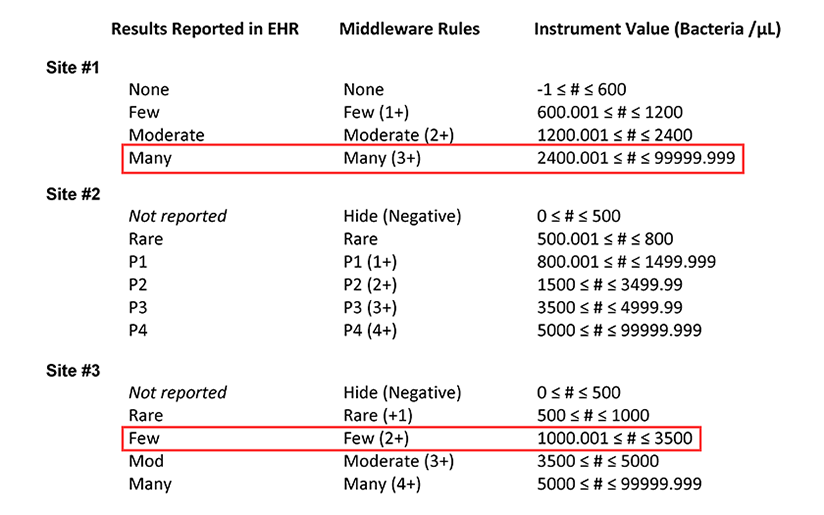 Table 1b. Summary of the middleware interpretation of the instrument values for number of bacteria per µL and the corresponding results reported in the electronic health record (EHR) for each site. This table highlights how a bacteria count of 3000 /µL is reported at sites #1 and #3.

After looking at the tables provided by the resident, the laboratory supervisors are surprised to learn that if they ran the same sample at all three sites, different results could be reported in the EHR, with the potential to impact patient management. Furthermore, the team realizes that if a single reflex algorithm were implemented at all three sites, variations in the input parameters could mean that the same sample is subjected to urine culture at one laboratory but not at another.

You report to the hospital system’s infection control committee the challenge posed by the different practices at the three laboratories. You explain that you are working with the laboratory staff and vendor to first standardize the middleware rules and reporting in the EHR and provide a revised timeline to account for the extra steps that are necessary for setting up a standardized reflex testing protocol.

Middleware can optimize and improve the data flow between laboratory analyzers and the LIS. Among the many advantages of incorporating middleware into the laboratory includes the ability to create customizable rule sets for reflex testing and autoverification tasks.

Inclusion of the middleware rules in the SOP for the respective laboratory procedures so that they are subject to the same annual review process as the SOPs is a recommended practice. It is important to also evaluate whether the results are appearing correctly when transmitted to the EHR. Even when the same analyzer is used across laboratories, they may have different middleware rules which can significantly alter the reported results or downstream testing. It is also important to evaluate whether the raw data from analyzers is transmitted to the LIS for review, or if the only data received by the LIS is the middleware interpretation of the raw data.

When considering harmonizing data across disparate sites, for example, to establish a reflex algorithm, it is important to review the middleware rules applied to results from each analyzer. Variations in middleware rules may also have potential implications if the results are populating the same field in the EHR and will therefore look interchangeable to the patient facing colleagues. Finally, aggregation of data demands consistency of data type and format across sites.

Complete the cases below and then complete the survey to tell us what you think.