As in adult oncology, pediatric molecular oncology testing provides diagnostic, prognostic, and therapeutic information derived from tumor genomes. Fundamentally, proper treatment for a patient depends upon an accurate and complete diagnosis of their tumor and is further directed by prognostic and, more recently, therapeutic molecular signatures. While there are some similarities to adult oncology, the biology of pediatric tumors is different, thus pediatric molecular oncology testing must reflect these differences.

Figure 1: The relative incidence of pediatric and adult tumors when considering the five most common adult cancers (a) and the seven most common pediatric cancers (b). 1,3,4,5,6,20

First, pediatric malignancy is rare, accounting for approximately 1% of all incidences of human cancer, which has complicated research of molecular oncogenesis and its application to pediatric tumors. Direct comparisons are also complicated by the fact that adult cancers are classified by the anatomical site of the primary tumor, while cancers in children and younger adolescents are classified by histology into the 12 major groups of the International Classification of Childhood Cancers system. Absolute numbers notwithstanding, there are significant differences between the proportion and types of tumors that arise between pediatric and adult patients. A review of Surveillance, Epidemiology, and End Results Program (SEER) data shows adults are most commonly affected by carcinomas while pediatric patients develop predominantly hematologic and non-epithelial solid tumors (Figure 1).1,2

IDH1/2 variants are identified in most adult gliomas and are only rarely seen in pediatric patients. The vast majority of pediatric IDH mutations are in older adolescents, representing the early tail of adult cases, and those identified under age 14 are exceedingly rare. Conversely, H3 K27M-mutant midline gliomas represent the bulk of pediatric high-grade tumors and are only very rarely seen in adult patients. When found in adults, they have a less aggressive clinical course, suggesting differences in the underlying biology that remains to be more clearly understood.7

In addition to the H3 K27M-mutant midline gliomas, the World Health Organization classifications are increasingly recognizing exclusively or mostly pediatric entities with distinct molecular features, including several hematopoietic entities. Pediatric-type follicular lymphoma (PTFL) lacks the characteristic t(14;18) of most follicular lymphomas. Similarly, mutations in KMT2D, CREBBP, and EZH2 are also not seen with PTFL, but instead show a predominance of MAP2K1 mutations. Conversely, genetic aberrations of 1p36 are common to both types. Large B-cell lymphoma with IRF4 rearrangement is defined by rearrangement of IRF4, mostly with IGH, and is cytogenetically cryptic. Burkitt-like lymphoma with 11q aberration resembles Burkitt lymphoma in multiple respects but lacks MYC rearrangements, instead showing an 11q aberration characterized by proximal interstitial gains at 11q23 and telomeric losses. Pediatric nodal marginal zone lymphoma shows similar genetic features to its adult counterpart, including occasional trisomies of chromosomes 18 or 3 and clonal rearrangements of the IGH region, but future differences may become apparent in the various regions of the IGH cluster that are involved.19

While some tumor types – such as Hodgkin lymphoma and T-lymphoblastic lymphoma – appear to show very little genomic difference between pediatric and adult populations, many others do28 30. A sampling is summarized in the table below:

Additionally, many pediatric sarcomas, including the “small round blue cell tumors”, are characterized by gene rearrangements. Rhabdomyosarcomas are necessarily routinely tested for FOXO1 rearrangement, usually by FISH. Ewing sarcomas have historically been confirmed by immunohistochemistry and detection of EWSR1 rearrangement by FISH; however, the discovery of several other tumor types with EWSR1 rearrangements that may confound the differential diagnosis have made detection of the fusion partners more important. The newer group of “Ewing-like” or undifferentiated round cell sarcomas are defined by their relevant gene fusions such as CIC-rearranged sarcomas, most commonly with DUX4, and BCOR-rearranged sarcoma, usually with CCNB3. NGS assays with the ability to query RNA and investigate multiple potential fusion partners simultaneously have found particular utility for diagnosis of these tumors.38 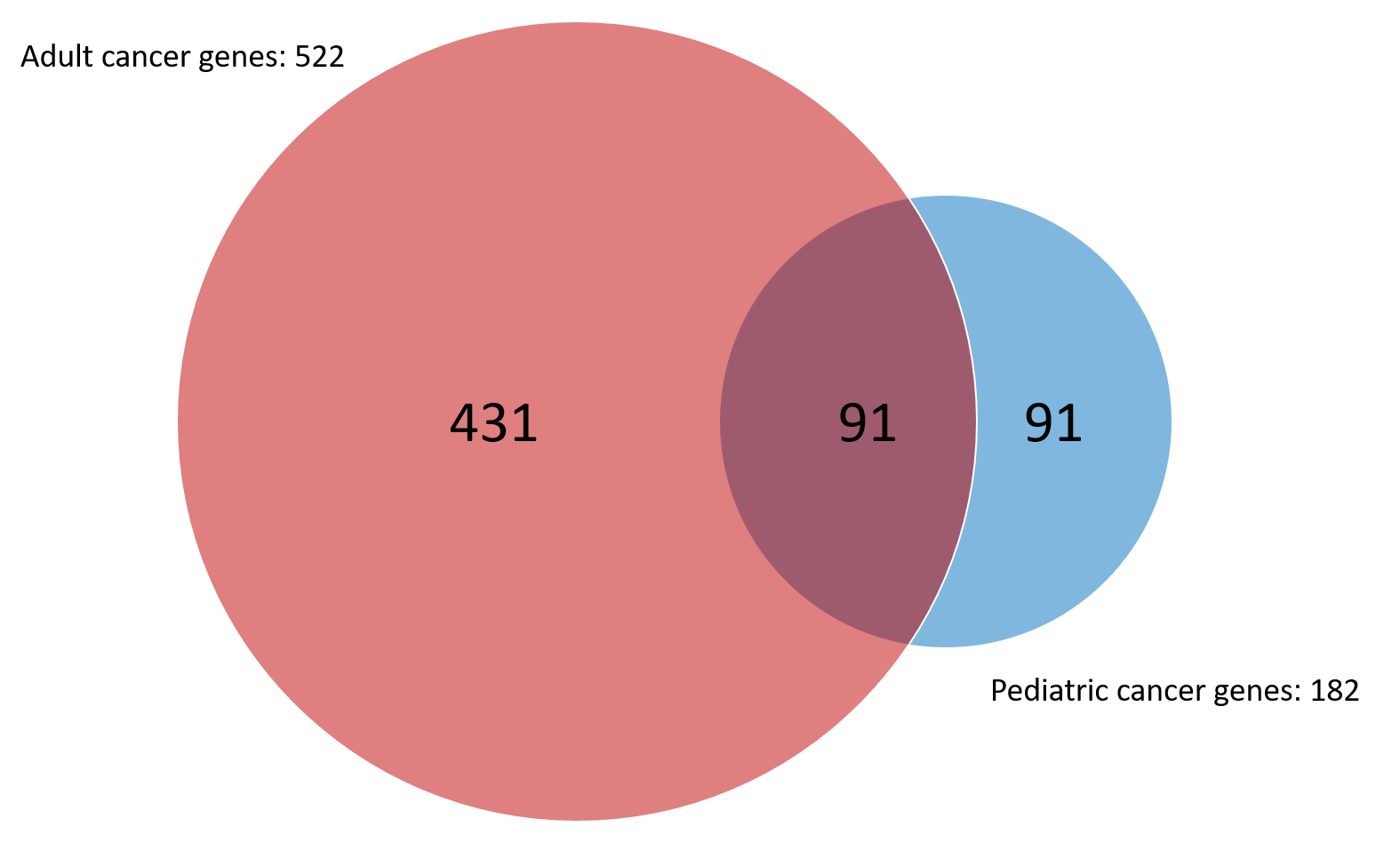 The increasing availability and diminishing costs of large sequencing projects have led to many publications investigating the genomic landscapes of adult and pediatric tumors alike. Recent pan-cancer assessments have shown half of proven and suspected pediatric cancer-related genes do not overlap with adult genes (Figure 3).

The classic mainstays of pediatric malignancy testing include FISH and chromosomal analysis, particularly in leukemias and sarcomas. FISH remains a well-established technique for the detection of translocations, either via detection of normal structure being lost (breakapart probes) or abnormal structures being formed (fusion probes). Reverse transcription PCR followed by sequencing is also frequently employed, although the agnostic nature of FISH breakapart probes towards the fusion partner gene of particularly promiscuous oncogenes (e.g., KMT2A) carries an advantage. Karyotyping, despite its relative technical complexity and slow turnaround times, remains a mainstay and indeed is required for ploidy assessment and resolution of atypical FISH results. Chromosomal microarray testing, well-established in leukemia testing, has also become more established in solid tumors for copy number assessment as described earlier with more recent advances that have improved the interpretation of tumor tissue retrieved from formalin-fixed paraffin embedded (FFPE) blocks. Laboratories are increasingly using more NGS assays although some technical limitations, such as copy number variant and large chromosomal structural alteration detection, and accessibility and cost have been factors limiting widespread adoption.

Molecular pathology laboratories will benefit from considering their respective testing populations. If pediatric malignancies are routinely tested, access to the various modalities discussed above will be essential either as an in-house capability or via partnership with a reference laboratory. NGS platforms will continue to become more practical and laboratories will want to pay special attention to developing broad gene rearrangement detection and querying of relevant pediatric cancer genes.

Molecular testing increasingly offers more reliable and defined diagnoses as well as prognostic implications and therapeutic choices - all factors that will further refine the information available to clinicians, patients, and their families to make the right choice for their particular situation. Recognizing and addressing the different needs of pediatric patients will allow molecular pathology laboratories to be a key partner in that process.