The diagnosis of a neurodegenerative disease (NDD) based on physical examination findings and clinical symptoms is often challenging. Recent studies have shown over 30% of patients are misdiagnosed early in the disease process due to non-specific clinical findings.1 Progressive supranuclear palsy (PSP - tauopathy), for example, is characterized by a movement disorder with frequent falls and impaired eye movements, but only late in the disease. Parkinson’s disease (PD – a synucleinopathy) patients may show similar symptoms and PSP is often misdiagnosed as PD, especially early in the disorder. Distinction between these two entities is essential for proper diagnosis and treatment. No effective treatment is available currently for PSP, however, patients with PD benefit from dopamine replacement therapy. Therefore, accurate diagnosis allows for the institution of appropriate symptomatic therapy and the avoidance of potentially dangerous treatment. Accurate diagnosis is essential for prognostication and life planning.

Given the challenges in establishing an early diagnosis and the importance of accurate diagnosis for treatment, studies looking at aberrant proteins as potential biomarkers of NDD have been ongoing. The current state of NDD diagnosis is evolving from one based entirely on clinical symptoms and radiologic testing to one incorporating novel biomarkers including phosphorylated α-synuclein, amyloid, and tau from blood, cerebrospinal fluid, or tissue.

Anatomic pathologists infrequently evaluate cutaneous nerves and may be unfamiliar with advances in the field of cutaneous neuropathology and biomarkers of NDD. Neurologists have been at the forefront in utilizing cutaneous biopsies to evaluate the health of the small unmyelinated sensory nerves over the past 20 years, while the general pathologist is rarely involved with evaluation of neuromuscular biopsy tissues.2 An update on emerging biomarker testing within the field of neurodegenerative changes is provided here to educate pathologists on these new developments. Collaboration of pathologists and neurologists is essential in evaluating patients with NDD.

Synucleinopathies are a subgroup of NDDs characterized by the accumulation of misfolded aggregates of either native or phosphorylated alpha-synuclein (α-syn) in the cytoplasm of neurons, glia, and axonal nerve tissue.3 The presence of the abnormal aggregates of α-syn appear several years before the onset of clinical symptoms in patients with a synucleinopathy. α-syn-containing inclusions in PD are found in peripheral tissues including skin, colon, and salivary glands.4 Detection of the abnormal phosphorylated form of the protein in peripheral tissue may aid in improved diagnostic accuracy and treatment.3

The prototypical synucleinopathy is PD—the second most common NDD with a prevalence that is expected to double over the next 30 years.5 The associated morbidity associated with various NDDs is taxing on both the patient and caregiver and results in decreased quality of life. With the aging population, the need for an objective biomarker to help stratify diagnoses and tailor treatment is critical. Other synucleinopathies characterized by the deposition of misfolded α-syn include dementia with Lewy bodies (DLB), multiple system atrophy (MSA), pure autonomic failure (PAF), and REM sleep behavior disorder (RBD).

These diseases, characterized as synucleinopathies, stand in contrast to the NDDs that are not characterized by abnormal phosphorylated α-syn. Entities not associated with misfolded α-syn include Alzheimer’s disease, PSP, amytrophic lateral sclerosis (ALS), frontotemporal dementia, vascular dementia, and cortical basal degeneration.6 The non-synucleinopathies are characterized by abnormal deposition of other misfolded proteins including tau (tauopathies) and TDP-43.7 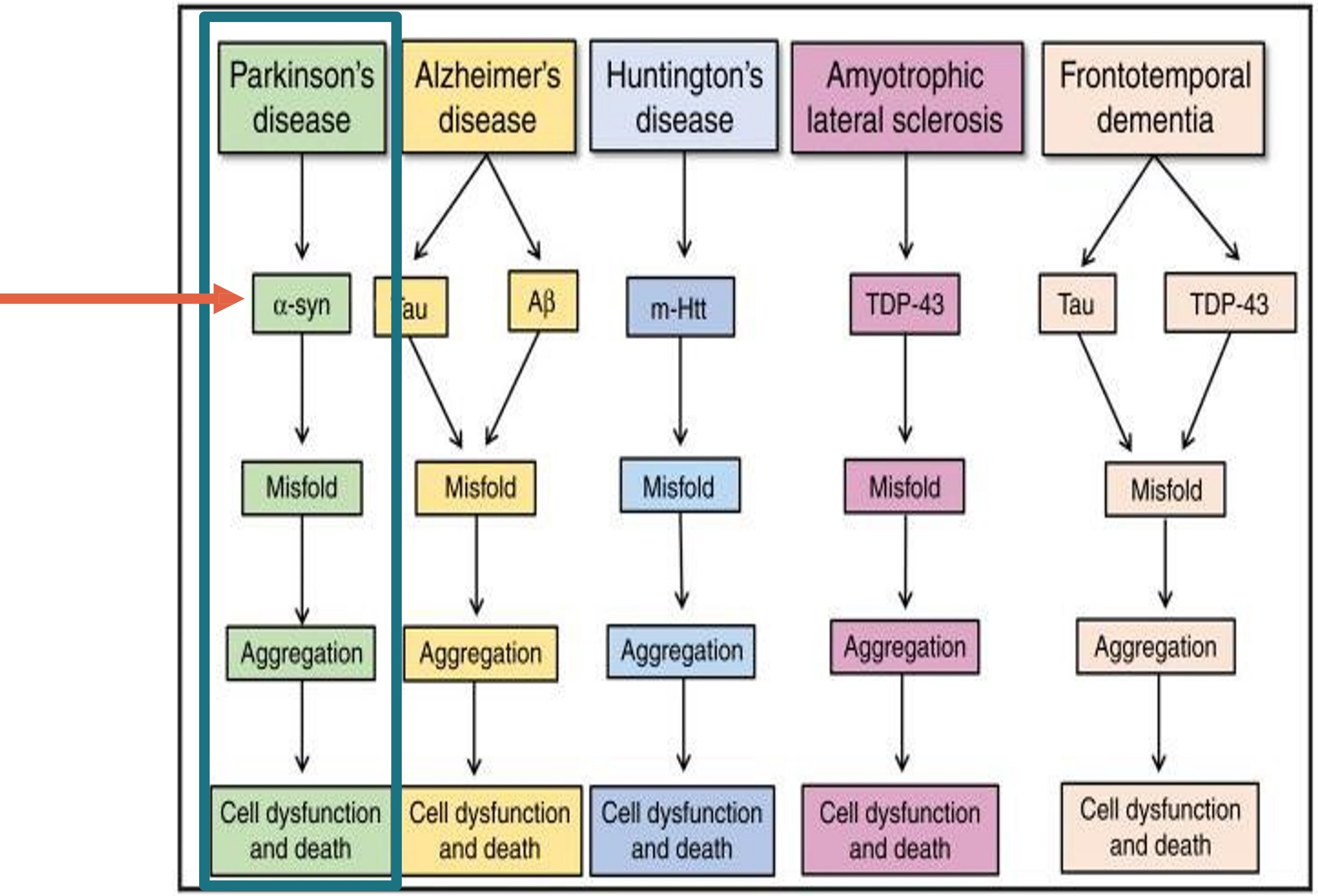 α-syn is a protein that comprises 140 amino acids and is encoded by the SNCA gene on Chr 4. It is found in neural tissues and in red blood cells. α-syn is the most prominent protein in Lewy bodies and Lewy neurites.8 In its normal state, α-syn is believed to stabilize neuron structures and plays a role in neuron-to-neuron signaling, modulating the stability of the neuronal membrane and influencing presynaptic signaling and membrane trafficking via vesicular transport.4

The pathologic form of the synuclein protein, phosphorylated α-syn (P-syn), is characterized by addition of a phosphate group (P04) to the serine moiety at position 129.3 P-syn results from a variety of mechanisms including single nucleotide mutations, excess production, decreased degradation, inflammation, or mitochondrial dysfunction. Mutations in SNCA gene result in generation of P-syn and were found to be associated with autosomal-dominant early-onset PD. Abnormal forms of synuclein have been shown to propagate from one neuron to another, enabling spread through the nervous system.

Skin biopsies represent a minimally invasive process by which to examine cutaneous nerves for P-syn. Detection of P-syn within cutaneous nerves using immunofluorescence can demonstrate increased abnormal α-syn in cutaneous sympathetic adrenergic and sympathetic cholinergic fibers in patients with PD and other synucleinopathies.9

Figure 2: P-syn image demonstrates a positively staining fiber as a red-orange color, a portion of which has a thin, delicate, serpiginous appearance, and two other areas with more irregular appearance.

Evaluation of P-syn can be challenging due to background artifacts and low levels of expression intensity. To call a case positive, the P-syn staining needs to be co-localized within a nerve fiber and be of greater intensity than background staining.

Other testing modalities for detecting aberrant α-syn include the prion-like self-aggregating potential of pathologic α-syn using a testing modality called real-time quaking-induced conversion (RT-QuIC).10 Comparison studies show that immunofluorescence had a sensitivity of 90% and a specificity of 100%, for distinguishing a synucleinopathy from a non-synucleinopathy in skin biopsies, whereas RT-QuIC showed 86% sensitivity and 80% specificity, supporting that immunofluorescence is the preferable testing method.11 Research looking at other abnormal protein expression in AD, ALS, Huntington’s disease, and frontotemporal dementia is ongoing.

Given the increasing prevalence of various NDDs and associated comorbidity, attempts at identifying other early biomarkers of NDDs is expected to grow. Molecular testing remains an additional future modality of testing in this space.

Ronald Paler Jr., MD, FCAP serves as Chief Pathologist and Laboratory Medical Director at CND Life Sciences. Dr. Paler is also a key contributor to CND’s research and development projects, continuous improvement initiatives, and collaborations with the biopharma industry. An anatomic and cytopathology board-certified pathologist, he attended Wayne State University School of Medicine in Detroit, MI and performed residency training at Los Angeles County + USC Medical Center in Los Angeles. He has practiced pathology in the commercial reference laboratory setting for 22 years. Prior to starting at CND, he worked as Medical Director and Surgical Pathologist at Labcorp Oncology (formerly Impath and Genzyme Genetics) for 21 years, the last eight years as Medical Director in Phoenix, AZ. His accomplishments include implementation of PD-L1 companion diagnostic testing, HPV mRNA ISH testing, digital pathology, novel IHC markers, EGFR, KRAS, and NRAS molecular testing, and the launch of new LIS systems. He has served on various committees within the College of American Pathologists including the 15189 Committee and the CAP Personalized Health Care Committee as well as the House of Delegates. Dr. Paler is an ardent champion of laboratory quality and ISO 15189 principles, and he advocates as a leader in Diversity, Equity, and Inclusion initiatives.

Navigating Blood Shortages: How Pathologists Can Guide and Lead
7 Reasons to Join a CAP Committee